Using the Football Manager tactics creator can be an easy way of creating the formation and playing styles you want, but have you ever thought about how you can influence the individual player responsibilities and level of mentality within your chosen team mentality and tactics fluidity settings?

Sports Interactive Tactics moderator The Hand of God has written a 8-step walk through analyzing how a tactic can be organized under the different mentality structures and fluidity settings in Football Manager 2014.

These excellent Football Manager guides gives you a practical framework for understanding the effects of fluidity and player duties according to the mentality ladder laid out for you below. Here you can examine how player responsibilities will vary depending on a players duty and team mentality settings according to different aspects of the match. 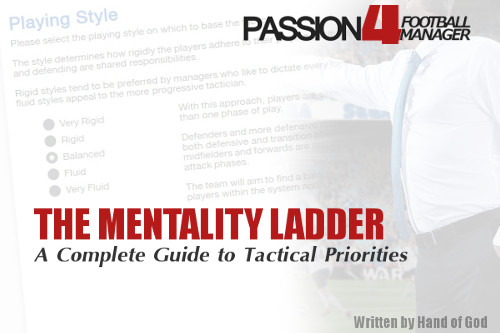 Each day for the next few days we will publish a part per day! It will be a joyful read giving you some worthy knowledge on how to create better Football Manager tactics. The full guide will give you an increased knowledge on players tactical priorities in attacking phase of play, defending and controlling the match.

The first part of the Mentality ladder series focus on the player duties and each player roles tactical priority and responsibilities when attacking, defending or supporting play. It gives you the chance to fully learn why selecting duties are important and shows you each roles rung of task when the team has the ball or not.

The player duty and fluidity settings will serve as a great introduction to the next part in the series. It will give you an idea of general tactical responsibilities and the effects the different team mentalities has on the players rung of task helping you to fully convert your tactical vision into Football Manager!

The collective responsibilities of the very fluid mentality basically represents systems in which all players are expected to help contribute to a general, collective function and in which, accordingly, there is significantly less differentiation between players based on position and role.

The fluid mentality structure divide the team into two separate units each focused closely on a small but distinct range of tactical priorities. In effect, this creates a divided structure with a more aggressive, fluid attack backed by a significantly more cautious defense.

In part 4 ‘The Hand of God’ analysis the balanced mentality structure, a setting which can often be entitled as asymmetric shapes when creating a Football Manager tactics. This part will provide you an in-depth look on the different player roles and positions rung of task and tactical priority in the balanced mentality.

The Balanced mentality structure divide the team into three units based on the duties assigned to individual players.

The Rigid mentality structures cover the broadest range of tactical priorities with roles sharply defining how players contribute to the team’s strategic objective.

The very rigid mentality structure is the final part abut the specific Football Manager Fluidity settings. Here the very rigid fluidity setting will be analyzed in regard to how the sweeper, trequartista and deep lying playmaker effects the team shape and tactical priorities.

Duty and Other Settings in the Mentality Ladder

Welcome to this detail section discussion how the mentality ladder influence all parts of play including the different phases where the player has the ball to defending and pressing. Here the author let you understand how the player duty attack, defend and support affects the defensive or attacking phase – analyzing the players tactical priorities and responsibilities in a bigger perspective.

This part will about player duties and other settings will be important knowledge to create better tactics in Football Manager in terms of shape and setting up responsibilities within the team.

This is the final part of the complete series about the Mentality Ladder in Football Manager. The time has now come to look at tactical priorities in detail for the different player roles.

Each tactical priority serves as a general point of reference that clarifies how a player is supposed to function within a broader tactical system, so you can effectively put the mentality ladder into practice. This will also require consideration of a player’s tactical priority in relation to his role, which you will learn more about here.