On Football Manager one of my favourite past times has been buying youngsters and developing them into World Class talent. It is a rather long-term method of succeeding in FM as by buying young (and hopefully cheap) you can either develop the players into first-team talent or sell them on for profit.

In this Football Manager guide to buying and selling young players I’ll hand you my transfer and contract tips and reveal how to get the best deals possible. Here we will take a step back from the previous released tips from The Northman who looked at how to save money at contract negotiations by looking at the complete picture of buying and selling players in Football Manager whilst saving money and spend as little as possible from your ‘mediocre’ transfer budget.

Continue reading to get VivaLaVidaFM’s excellent tips within his Football Manager Guide to Buying & Selling Players as transfers and contracts are carefully examined.

If you have any additional tips for improving transfers do leave them in the comments section at the end of this post!

When I’ve decided on a player I know I want to buy, I’ll make an offer for him. It’s here that I’ll be looking to save as much money as possible whilst ensuring that I can still achieve a deal.

With many youngsters, teams are always looking to make money from their hot prospects in the future. Later in this guide I’ll show you how I try to make as much money as possible from my outgoing transfers.

As I’m trying to save money here, I remove and exclude these clauses from any transfer bid before suggesting terms. This means the opposition won’t get a chance to lock in these clauses.

I’ll always make sure a player I’m interested in is fully scouted. When a player is scouted, you can see a recommended price for him on his overview screen. Sometimes the price shown is his contract expiry compensation price as you can approach to sign the player on a free.

However, this can often lead to you overspending on a player. Below are three examples where I’ve made a transfer bid for a player instead of approaching to sign them. I didn’t actually sign these players in my personal save with Ostersund, but it just shows that you can save a lot of money using this tip!

If I signed these three players I would have saved OVER £1MILLION using this tip. Pretty good right?

Once you’ve had a transfer bid accepted, you will now be able to offer contract terms to your new player. Here is where you can save even more money whilst also protecting the long-term future of the player at your club.

Some agents will lock in the minimum release fee clause in contracts and sometimes this is a deal breaker for me. But in deals where they are negotiable, I will always remove and exclude them from the negotiation.

With youngsters, agents will often lock this in or try to negotiate a release fee in case their players outgrow the club. With my Ostersund save, I had a goalkeeper with a locked in release fee of £2Million. Here is his contract below:

Saheed’s agent locked in a release clause, but as he was a player I 100% wanted for my team I decided to sign him. I signed him on a free so worst case scenario I’d make two million from him. But as you will see later in the post I will make a lot more from him! 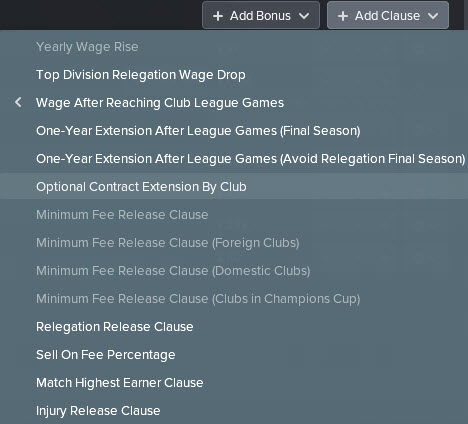 The final tip I have for contract dealings is to lock in a contract extension clause. Especially with younger players, this helps to secure their future with your club. In my Ostersund save I have a defender who wants to leave but he is a crucial part of our long-term future. He’s only 19 and has had offers from PSG and Inter Milan and wants to leave. He isn’t willing to sign a new contract because of this. Thanks to our little tip, a 3-year contract extension clause in his contract means that his long-term future is here with us, regardless of his desire to leave.

When loaning a player, there are several things to consider. Loan players can be a really effective way of signing great players at low cost for short-term objectives. I am proud to say I feel I’ve mastered the loan system in my Ostersund save.

Here is an example of a loan offer for a Juventus newgen. I won’t actually be bidding for this player as the wage demands are too high, but what you can see is that you can try to sign players on loan for more than one season. This is a brilliant little feature as you can effectively have a player at your club for two seasons without risk of losing him.

I’ve signed Manchester United youngster Angel Gomes on two separate loan deals, both being two years spells. He is approaching his fourth year with Ostersund and is close to being a five star player for the side. Usually, with a permanent signing, I’d be refusing to sell him or reluctantly letting him go. With a one-year loan signing I’d try to get him back on loan but often the loaning side will increase wage demands or refuse as they will look to give the player first-team football.

Here are two further players I’ve signed on loan using this tip. Dejan Kulusevski (one of the Scandinavian wonderkids highlighted in this post) was our player for three years before Atalanta wanted him for themselves. Current right-back newgen Cozma (on loan from PSG) is our player for THREE seasons! Regardless of whether this is just a bug or because of the time of year I signed him, I’m happy!

Here is the list of clauses available to include in your loan deals, both incoming and outgoing.

The clause that interests me when loaning players out is the ‘Can play for parent club/reserves’ clause. I have yet to use this in any of my outgoing loan deals, but should I send out a youngster who then scores tons of goals for his loanee side, with this clause active you could play him in games for your club too. If he underperforms, he will still be able to play for his loan club.

This final section of our guide is about selling players. Once you have decided that a player is going to leave your club, make sure that you get the best deal for them possible. Here are some tips that will help you to do so.

Depending on the time of the deal, this could be very advantageous for your club in the short-term.

This is the big one. If you can lock in this clause on your outgoing deals, especially if you are selling a wonderkid to a high reputation side, you could bankroll your club for years.

Here is Saheed Udeh shown earlier in the post. The young goalkeeper was an outstanding player for us and quickly attracted interest from services abroad. As you will have seen, Udeh had a minimum fee release clause locked into his contract dealing set at £2M.

Luckily for us, no-one offered a straight 2mil for Udeh and we managed to arrange this transfer. A 50% percentage of next sale was locked into the negotiation. This would mean that if Udeh is sold for £10M in future, we would get £5M for him! PSG need to hire better negotiators if they failed to spot Udeh’s release fee.

We were lucky with Udeh’s transfer, but with other youngsters with no minimum release fee, you can often lock in this clause if you reduce the transfer fee offered immediately. In doing so, you’ll get less money in the short-term but so much more money in the future.

That’s it from me. Hopefully you have enjoyed these transfer and contract tips. If you did, feel free to leave your feedback in the comments.

I’m Tom from VivaLaVidaFM. Please do come over and check out my series with Ostersund and much more Football Manager content. You can also find me on Twitter here: @VivaLaVidaFM. Thanks for reading.