Welcome to a new Football Manager team guide by CPlatts85.

Today we head to the central England’s Midlands region to the club who have brought us legends like Nigel Clough and have been acted as a stepping stone for legendary footballers like Stuart Pearce, Roy Keane, Chris Sutton and Trevor Francis. We’re of course talking about Nottingham Forest.

Here’s the definite FM 2020 Nottingham Forest team guide, giving you an insight to the clubs transfer budget, club vision and training facilities. We hope you enjoy this team guide.

Nottingham Forest are best known for their days under the charismatic Brian Clough as manager in the late 70’s to early 90’s. Under his tutelage they were able to win the League title in 1978 and consecutive European Cups in ’79 and ’80. Since then it has been a bit of a rollercoaster ride for the Forest fans having bounced between the Premier League and Championship for most of the 90’s, while suffering a relegation to League 1 in 2005. Bouncing back to the Championship in 2008 where they have been ever since.

The way the club would like to play football is in an attacking manner. It is a preferred way of football but not essential so long as you hit the targets set out by the chairman.

As one of the clubs who as struggled to keep within the boundaries of Financial Fair Play (FFP) in recent years, the chairman would like you to keep within the set wage budget. With £3.5 million in the transfer fund there is some room to manoeuvre, but with very little left in the wage budget it might be a case of one player out, one player in to make this work. 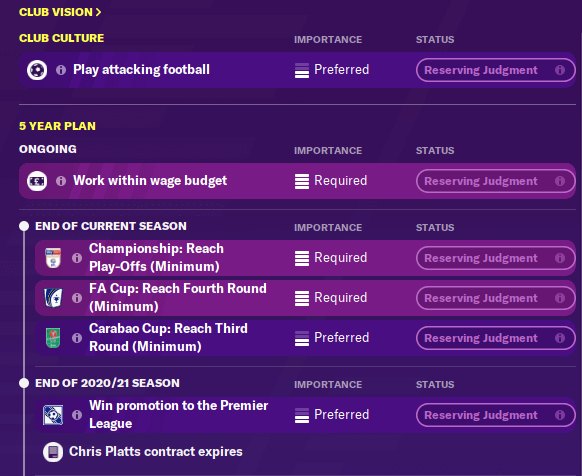 The chairman is extremely ambitious and has proven this by his investment in the squad over the last few seasons. Therefore, if you’re not heading for a Play Off position straight away you might be struggling to keep your job. With promotion set as the main criteria for the second season you really need to be off to a quick start to keep the board happy.

Chema is seen as the best player in the squad. With him being the leader in the heart of defence, it will be a good idea to build a good defence around him to allow the attacking players to be able to play without fear going forward.

Matty Cash is already seen as a great prospect for Forest going into the future. With the ability to play anywhere down the right, his flexibility in these positions will make him a key player for any tactics you use. With an attacking edge to his game it is more likely he will be most affecting as a right midfielder or winger.

Joao Carvalho was brought in for big money and did alright in his first season in the Championship. If the team is going to be a success in the future it is likely to be built around him. His creative flair playing in the hole behind a main striker is where he will be most effective. Although he can be used out wide as well. One to keep hold of as he will possibly be the player that fires you to promotion.

Nottingham Forest is a good challenge for the Championship. With a trigger-happy Chairman, you’ll have to prove yourself from day one. Failure to reach those demanding targets will inevitably lead to a quick exit from the team.