Understanding the Football Manager training facilities, its levels and how they influence current and potential ability is an important factor to get the most out of player development, especially considering youth development and their ability progression.

Here you’ll get a closer insight to the levels of the training facilities and how they work in Football Manager.

Coming to grips with the level of training facilities in Football Manager immediately when taking over a new club is an essential day one task. For the long term planning of your club it’s important to know which training facilities to upgrade to not only develop the players at a faster rate but also to get better newgens from the annual youth intake.

But how do these training facilities and specific youth facilities impact the development of players; e.g their influence on current ability and potential ability progression?

In this article I will examine the Football Manager Training Facilities Levels and how they influence youth and player development improvement as closely as possible. We will define the different Football Manager training facilities – a knowledge you will definitely favour from when building a club dynasty – taking your amateur club to a professional level.

An Ultimate Guide to Junior Coaching, Youth- and Training Facilities in Football Manager

The Levels of Training Facility – The Rate of Player Development

The training facility levels are as follows from worst to best:

Below we will go through the different other facilities which are related to the current and potential ability progression rate. This means that all these areas should be focused on in order to succeed from player and youth development.

The youth facility levels are as follows from worst to best:

The main aim is to see a closer gap between current ability and potential ability for your youngsters right? Making it both more likely at an earlier point to see them good enough challenging for the first team. Higher levels of youth facilities coupled with 5-star youth coaches and professional youth players with high determination and work rate will likely mean an higher development rate of the player attributes.

As you can imagine, there is no point to sign a bunch of Football Manager wonderkids with 5 star potential if they never will be able to reach more than half of it.


Youth and Training Facilities are the decisive factors for a players development rate and progression on current ability in order to reach full potential ability in the long term.

We have previously looked at how to get better regens from the annual youth intake. This will only be a summary of what the junior coaching affects.

The Football Manager Junior Coaching can be seen as the level and quality of your coaching team BEFORE your players reach your youth team. This means that for a better quality level of your youth candidates which you receive from the annual youth intake, you will need to improve the junior coaching level. There are 7 levels of the Junior Coaching:

An exceptional level of junior coaching may increase the probability to get players in the annual youth intake with higher current ability than a club with less facilities! Perhaps you’ll get a 4 or 5 silver star player after upgrading to excellent. These young players will most likely already be set to continue their progress in the reserves team, B-team (Spain) or Under-21 squad (England) as their CA is close to their PA. We can not look away from the importance of having an appropriate backroom staff member to handle the youth recruitment – the one who brings youth players into the club for example from the annual youth intake. The Head of youth Development staff role is designed to bring youngsters into the club.

An excellent Head of Youth Development backroom staff may likely improve the quality level of the regens as he uses his judgement to pick the ones with best personality and attributes according to your playing style and tactic – which decrease the necessary to re-train players. Retraining players into a new position will most likely set back the development rate and decrease potential ability substantially.


Junior coaching is the decisive factor of the regens / youth candidates’ level of current ability.

The Football Manager youth recruitment can be described as the level of scouting network range – aka how many players it reaches and the quality of these players. The clubs youth recruitment system are very much tied to its reputation. Better reputation will not only make it more likely that better newgens will like to join your training academy, but also that players from all over the world will look to it as the main option to reach world class standard.

A low youth recruitment will not only limit the regens to “unwanted” local regens but also make it more likely to get newgens with less potential in the annual youth intake. This can be compared to the network and reputation of the Spanish Barcelona, who have many youth academies, scouts and coaches around the world, who is constantly trying to develop and find top talents for the La Masia academy – the final step for all young players before being able to compete for a place in the first team.

There are eight levels of youth recruitment:


Youth recruitment is the decisive factor of the newgens / youth candidates level of potential ability – how good they can become and where they are from (Brazilian, Moroccan or even Norwegian).

While the training facilities are important for the level of current ability and potential ability progress and the overall player development, we cant hide the fact that match experience and match training is as important as individual training. Related to this issue, we like to talk a bit about the English Youth Setup Categories labelled as Youth Level under the overview of club facilities.

When managing an English club you may have noticed the Level of Youth Setup Category. This feature is part of the Elite Player Performance Plan via the Professional Development League introduced by FA in 2012 and controlled by Premier League.

The Professional Development League is a league structure which are an direct successor of the former Reserves League. There are 3 Youth Setup categories, where level 1 is the best and 3 is the lowest. Clubs in level 1 will get better competition facing clubs with similar reputation. In real life there are different youth setup levels for Under-21 and Under-18, but in Football Manager it ranges from level 1 to level 4, where the Under-21 setup exists of four groups, while the Under-18 consists of 2 groups.

The youth setup category can also be requested enhanced. An upgrade here will happen when a new season starts as the club is bound to play in the division and specific youth level briefly mentioned above. This will be similar to the unavailability to promote your current club to a higher division just by a click of a button.

Promoting your club to an higher youth setup level will ensure improved competition which often ensures better development rate for the players, as facing better players will provide more experience related to tactical knowledge and finally getting used to playing against more technical players at an higher match tempo.

For English clubs, this will be an important facility to upgrade in order to develop better youngsters as the players will face better opponents.

Everything you need to know about training facilities are on your club information facilities tab. From there, you can see the current level of your facilities. Upgrading your facilities or at least planning on how you shall go about in your youth development program in order to develop better players are vital.

At board meetings you’ll have (as I see it) different options to convince the board about the necessary of an improvement or expansion. I would presume that the way you talk to your chairman and board will affect your long term relationship with them. Most often the case isn’t about demanding but convincing them of the benefits of improving the current level of facilities. 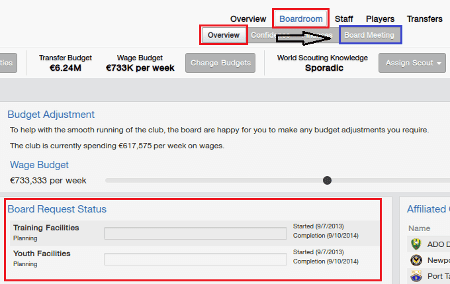 Planned expansions and the ability to request upgrades are done in the boardroom overview panel. To improve your current facilities, you’ll need to ask your board to schedule an upgrade. Alternatively, you can wait for your board to do it themselves. Upgrading your facilities will usually start immediately, but can also be scheduled for after the season is over depending on the board. It takes about some months to half a year depending on level of expansions – how big the upgrade is and which department you improves.

Upgrading isn’t as easy as it sounds though, and you should look at your finances and reputation before you ask your board for improving facilities. If the board thinks it’s too expensive they will not upgrade them, as you hasn’t the funds for it, or because the board has another philosophy, such as signing players for the first team only.

Remember, even when you finally build the best facilities, you’ll have to upgrade them every now and then (every few seasons), due to technological advancements in the world. This means that it’s an continuously process to reach and then keep a professional stature – something that can be quite expensive. But as I see it, I would rather spend money on player development rather than buying an ‘expensive’ player who have already fulfilled his potential ability – over the age of 23.

The Benefits of Improving The Club Facilities

The club facilities – hereby described as training and youth facilities are some of the most important parts of your club. Depending on the level of your training facilities, you’re more likely to improve your players no matter what training you instruct them to do. Higher quality levels will have greater effects in terms of attribute improvement and general development. This applies especially to younger players in your senior team, who haven’t yet reached their full potential. For example, an 18-year old player will eventually become a much better player if he’s in Barcelona than in AFC Wimbledon, just through training facilities alone. His development will be quicker, and his attributes will increase by individual training.

Investing in your Training facilities are beneficial for two major purposes:

Investing in your training facilities are also very beneficial in a long-term financial point of view. A facility upgrade is as expensive as a new player, but will relate directly to your football philosophies agreed under job interview. Hypothetically, you can resign from signing expensive, established players and in turn look for cheap, young players with potential. Signing undeveloped players for low prices, developing them to much better players thanks to your superior training facilities is an easy way to make loads of money. When a given player develops, his value increases. Before he’s sold, he will benefit your team with his improved skills, granting you better results in the process. Eventually your club will become a much better, richer and reputable institution.

Another point of upgrading the training facilities are the enhanced ability to attract better players. By continously improving clubs training facilities, there will be far more players who wants to look at the possibilities of putting pen on paper for your club.

An example from the best regens of the annual youth intake at Juventus.

We hope this short overview will convince you the importance of investing in your training facilities, and always reach for the best facilities in order to get players with higher current and potential ability or simply develop better players. In the long term, it’s an absolute must for any aspiring club to have the highest quality of facilities possible, both to attract better players but also to succeed with the development plan.


Have you ever done a Football Manager Challenge focusing on youth development and constantely upgrading training facilities over buying (youth) players?