Hello everyone. Welcome to the first article in our new series called Coaching Corner, where we wish to merge real life football with Football Manager by looking at interesting tactical aspects, bring you some tactical analysis and discuss formations, player roles and the phases of play to give you some examples. Our aim is lay the foundation for a more beneficial discussion about Football Manager; how different or realistic is Football Manager 2015 compared to football.


By handing you Ryan Tanks Bayern interpretation we opt to improve your tactical understanding of the requirements to re-create such a football philosophy in Football Manager 2015.

The Guardiola’s Bayern are one of the epitome of modern football. In Bayern under Guardiola, you see the need of player versatility. Josep Guardiola needs and requires his players to be versatile enough to take part of his tactical idea.

When Xabi Alonso is heavily marked and pressed, either Mehdi Benatia or Jerome Boateng would come closer to help Xabi loose the pressing intensity. Benatia or Boateng then have to have the right tactical understanding, of where to direct the ball. They have to decide the right way of passing. We see the need of ball playing defender ability here.

In another situation, when the Bayern front line is pressed and don’t got enough space to play, for example, the Bayern players often pass the ball back to the back line and let the defenders re-build the play. It could be switching the ball to another flank or driving the ball to the central midfield, where Xabi or Lahm are getting ready. Again, the need of good positioning, off the ball movement, anticipation, and quick decision are crucial.

You could also see the beautiful fluidity (a term used by Sport Interactive to interpret the flexibility and creative freedom), as the prime requirement of modern football. Bayern players have very good the off and on possession ability, framed with good technical attributes. With such strength, they easily interchange and move “freely”, to create spaces and chances.

In this Bayern team, you also see, that pressing is another crucial part of Guardiola tactical preferences which is well-presented by his players. A concept of how to control the space and reduces the opponent opportunity for passing, shooting, dribbling, and, of course, thinking.

As what Guardiola has been teaching us so far about possession, about high defensive line, about space control, and about his idea of hybrid play, it would be amazing to successfully emulate all of it into our tactical stock. The question is, is it possible to emulate it into Football Manager 2015? Let’s see some of them.

FC Bayern space control in the match against AS Roma. You can see the basic shape, 1 forward and 4 men behind to form the attacking-pressing formation

From the matches prior to this match, Guardiola had shown his idea of three men behind. That was what we could see when watching Bayern play. In this match, if you analyze the heat map, especially the Alaba personal map, you would assume, David Alaba played as one of the three center backs. In fact, Alaba had been on the more advanced midfielder position for about 25 minutes of play (early of the match). Alaba just started playing as one of the center back (left center side) in the last 65 minutes. Yes, Bayern played with 3 men behind, but for the first 25 minutes Bayern played with 2 Ball Playing Defenders.

The Guardiola’s Bayern has been playing with several different basic shapes. 3-4-3 and 3-3-3-1 hybrid system are the basic shapes which oftenly used.

In attacking phase, Bayern play with couple different shapes. In the match against AS Roma, Bayern attack with several different shapes. One of them was, with 3 men in the central area (zone 14), mainly occupied by Gotze, Muller and Lewandowski. They attack right into the AS Roma central defense. Two players getting ready on the wide area, which are Robben and Bernat. With Robben often attacked the half space to find the comfortable space for left footed shot, Bernat played with different style, as he attacked through the AS Roma right wide.

Another Bayern attcking phase system. The front line trio supported by 2 wide men. Xabi and Lahm patrol and supervise from the deeper area

The Defensive-Pressing and Attacking Transition 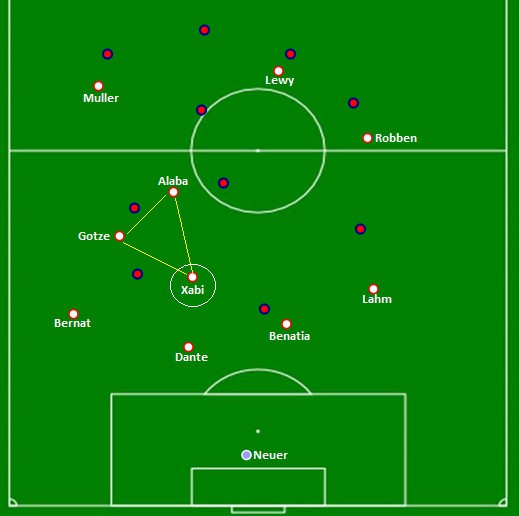 The above image once again shows us how Guardiola instructs his advanced midfielder (Gotze or Muller) to drop deep, especially, when Bayern need a compact defensive-pressing shape. In one occasion, Gotze drops deep to form pressing shape along with either Lahm, Xabi or David Alaba. By asking the advance player to form a defensive-pressing shape with the midfielders (instead of the defenders), you can avoid your back line from direct clash with the opponent. This would be assuring the safety comes first for the back line and the goalkeeper.

That’s the very basic read of how Bayern implement their ultra-hybrid idea of shape. They play it very very well with amazing flexibility, tactical understanding and teamwork. But if you think that’s all what Bayern got, I suggest you to see this – the 6th goal of Bayern in the match against AS Roma. A very fast attacking transition lead to the fast counter attack and earn Bayern their 6th goal.

Gotze the false nine, drops deep and swap with Ribery the left attacking midfielder. Arjen Robben, the right side midfielder occupies the central midfielder. His respective position, on the right side, is occupied by Philip Lahm. And you see the more advanced player on the upper right side? That’s David Alaba, dear!! The Guardiola’s left central defender.


Brilliant. Simply brilliant. A flexible shape and positioning. A very good understanding and teamwork. Simply world class. That’s why I said, FC Bayern have been one of the epitome of modern football. They show us everything of what modern football is all about. Pep Guardiola shows the world of how he adjusts the old idea with modern tweak to get the right set-up and can still accommodate the idea of play he wants.

The hybrid concept of role and formation, the fluidity, and the asymmetric shape between the flanks are just attracting to emulate into Football Manager. I won’t tell you how to set the Team Instruction or how to adjust the Player Instruction. That’s not what I’m telling you, guys. I’m pretty sure that all of you have what it needs to emulate the real life thing into FM.

With the current Match Engine (ME), i don’t think any FM users could fully emulate the Bayern play into FM. It’s just too difficult. No, it’s just impossible! Unfortunately!

We could never fully control the space and say that’s how “I successfully emulate the right pressing scheme into Football Manager”. We could just instruct our players to charge at the ball and force the opponent to make mistakes. Ironically, as what Jurgen Klopp (father of the modern pressing play) said, pressing is not just about run and after the ball, but it is more about the space control so we reduce the space for the opponent and force them making mistake, at once.

We could never fully implement the ultra-hybrid system of Guardiola’s Bayern into FM. The current ME could only accommodate the basic shape you choose from the drop down menu. It’s impossible to play, in one match, with so much shapes as what Bayern do, without you switch the formation manually :(

Some of the roles are also reducing our chance of emulating. As you all know, Raumdeuter is a role which does not track back. It seems to be more interested to stay up and wait for the attack comes up. The lazy cunt (as what Guido Merry told me). An unrealistic fact which we oftenly see how good and highly work rate is Thomas Muller (the Raumdeuter) when he takes part in his Bayern pressing system. On the other side, the current ME doesn’t recognize the new hybrid role of central defender and box to box role, which breed the box to box central defender. The role that played by David Alaba. A role of which we see a modern central defender, a roaming central defender that acts like a box to box midfielder, as he gets further forward and being one of the front line player. We need a role with special individual Mentality and Run From Deep, I’m sure.

Ok. Enough with the moaning. Sorry if it ruins this article, but hopefully there will be some overhaul Match Engine which help you come close to replicate the idea of Pep Guardiola into Football Manager 2015.

Have You succeeded to replicate a Football Manager 2015 Pep Guardiola Bayern Tactic or are working on it? What are you struggling with? Is it impossible at all as detailed above?
Attacking Tactics Football Playing Styles Possession Tactics
Share. Facebook Twitter Pinterest Email Reddit
Previous ArticleHow to Find The Best Scouts in Football Manager
Next Article Next Football Manager 2015 Wonderkid Martin Ødegaard?