With the Around the World megapack in your repository, you will have ‘all’ the nations in the world available to you when starting a new save! It’s the perfect companion for anyone trying out the Pentagon challenge!

About FM22 Around the World League Megapack

Dave The Editor’s Around the World league megapack makes 179 new nations playable in Football Manager 2022 and extends on the default number of playable leagues and nations in FM22 to cover the entire world with all continents included, once the final update is released.

With the prospect to manage in every nation within the world by extending the number of playable nations from 53 to 231, you’ll have the world at your feet for the perfect journeyman save!

By downloading this league megapack you can decide whether you want to begin your next journey in some of the greatest African footballing nations like Senegal, Morocco, Ivory Coast, or Nigeria, or if you want to manage in one of the minor footballing nations like Montenegro, Malta, Honduras or Jamaica. In fact, you’ll have the entire world available to pick from when starting a new save!

Experience an even more realistic Football Manager with all the nations in the world unlocked and playable! Select from over 200 divisions for the ideal Pentagon challenge!

The first update of the FM22 Around the World League megapack, it enhances the number of playable leagues in Europe and South America.

Over the course of the FM22 cycle, this megapack of nations and playable leagues will be extended to cover all nations in the entire world.

Below you’ll get an overview of all the changes to this megapack.

This World League megapack unlocks at least the Premier Division of Nations that’s not playable by default. For some nations, like Nigeria, the Ivory Coast or Egypt, the First Division is also playable. In Morocco, you will even experience the third tier being unlocked and ready to play!

*The file of SI was revised.
** – Here the 1st league had to be created as well because you cannot edit it due to an error of SI…
*** – The league reform of the 2nd league has not been included yet, as there is still too little information for it.

Other Features & Changes to Playable Nations

To make the playing experience as realistic as possible, all nations have been created using the advanced editor. The following changes have been made to improve the realism:

* Real values if sources were available. calculated values according to a Nations’s average expenditure (Wages etc.) to ensure, these Clubs are represented financially as realistic as possible.

** Real values if sources were available. calculated similarly to TV-Money to ensure balance.

All these changes are crucial to guarantee an overall balance in your save game. You can learn more about how to improve the realism in Football Manager by setting up a balanced save game with Daveincid’s tips provided here.

The result is a world league megapack that guarantees the most realistic experience in Football Manager ever!

Compatible megapacks and other mods to enhance realism even further

The Around the globe megapack is compatible with a number of other database extensions. We can recommend it to be used along with DodgeeGamer’s International Competitions Megapack which unlocks new senior and junior tournaments for national teams.

How to install the Around the World League Megapack?

A big applaud and a sincere thanks to Dave The Editor for giving us the opportunity and permission to publish this file on Passion4FM.com, and for all the great work putting into these databases.

A huge thanks and credits to the other contributors to the file, who have helped making this database into one of the most realistic league extension packs for Football Manager ever: 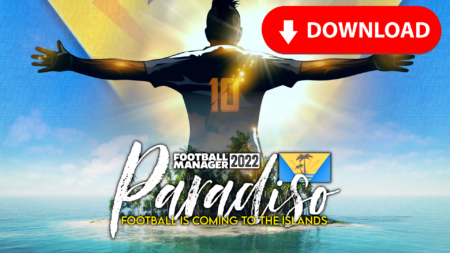 10 Football Manager 2023 Save Ideas for the Summer!

10 Football Manager 2023 Save Ideas for the Summer!