As the seasons passes by, the game as we know it changes. Cristiano Ronaldo, Gonzalo Higuain and David silva has retired and ‘replaced’ by the hated and beloved Football Manager newgens. These newgens will be generated around the same time each year, which coincides with the annual youth intake. The Football Manager 2019 newgens dates formerly known as the Football Manager regen dates or the annual youth intake. will be your chance to snap up quality newgens and new amazing talents “before everyone else”, and bring them into your own youth academy.

Passion4FM’s exclusive list of Football Manager 2019 newgens dates provides you with complete list of the annual youth intake dates worldwide. This means you will find the date when new players are generated for every nation of the world.

By given you the exclusive chance to see every nations Football Manager 2019 newgens dates, it will help you in managing your clubs scouting network program. If money is not a problem, you can literally scout every player immediately after the newly generated players has arrived. Discover how to do this by reading our excellent tips on how to find the best wonderkids and newgens in Football Manager.

The annual youth intake will also be your chance to get some new talents for free into your youth team. As the youth intake will be very unpredictable, you will discover the importance of sending scouts to all regions of the world, in order to track down the new Football Manager wonderkids and talents.

Before we give you the full list of Football Manager 2019 newgens dates, it might be worthy to understand what newgens are, for those of you who are unsure about this matter.

Some of you may wonder why the change of title for this post and why we have suddenly decided to change the title of our post from Football Manager regen dates to the Football Manager 2019 newgens dates instead. While the community often do the mistake by referring to the new random generated players as regens I feel it’s time to use the proper name for these players, as there is no such thing as a regen in the game anymore – and it has not been for the past 8 years or so.

Back then you would discover that the new generated players would adopt the database profile of retired players. So if Thierry Henry or Romario retired, you would soon see a younger version of the player in the game, inheriting their potential ability level, personality setting and other traits that would make them world class players in the future. It became too easy to discover new wonderkids and promising talents as all you need to know was who retired when. At this time you would have a mix of both regens and newgens in Football Manager.

Now the game is made up entirely of new generated players, or newgens as it’s most commonly referred to. The Football Manager Newgens are randomly generated players or staffs for that matter. All newgens have an unique profile, abilities and also some have a different personality than the real life players added in the database. The newgens are completely new players which will live for one lifetime. It gives the opportunity to preserve a competitive database no matter which season you’re heading into. As seasons passes by, newgens will take over, perhaps will your own son enter the database?!

As you will discover below, the newgens will enter the database at specific dates. They are very easy to spot as they have a computer generated face. Their starting age can be between 14 to 16 years on the day of youth intake, but can also be as old as 21. They will develop according to their potential and your guidance, just as “regular” players. Eventually, as you advance through the years to let’s say, season 2035/36, the game will be filled with only Football Manager newgens (players and staff).

There are two options in order to find the new generated Football Manager 2019 newgens. Instead of sending out one of your best scouts, you can find every newgen generated under: Search Overview – World – Transfers and Youth Intake. You will then be able to go into each players player profile and get scout reports. 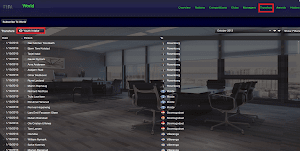 We recommend you to keep tabs of the world transfer section around the dates set below, in order to spot the new talents generated from the annual youth intake as quickly as possible. Be sure to check up on these dates to get the best newgens available.

Random Regen Dates or Regen Periods? What is true for Football Manager?

With the release of Football Manager 2015, Sports Interactive confirmed that the newgen dates were random, and not static dates as we were used to from FM14. With random dates it means that the annual youth intake will happen on different dates every year. This has carried on into FM17 and later on in Football Manager 2018, in more ways than one.

This was done to make the youth intake even more realistic as the dates will vary from year to year. But as the season starts on specific dates, we decided to investigate this issue and here is what we found out.

In Football Manager 2019 there is a mix of random, but set newgen dates and static ones. Confused? Let us try to explain;

Something that I came across when trying to find out the time period between regen dates in saves was that the dates in each game were the same for every season. I then asked a few other people, and they had the same newgen dates as I did, which led me to the conclusion that they were different every year, but set.

Some of the dates here are blank. This is when countries do not have newgen dates due to the game not finding it useful enough to generate them. Not me being lazy. This is common in the smaller nations as the clubs do not ‘exist’ in the game, for example if they are not active. This may just have happened on my save, and could be different on yours. Another thing is that, if you have a nation loaded in an edited database, for example Andorra, the newgen date will change, and will no longer be static.

You will also notice that smaller nations will have a fixed youth intake date – same date from save to save, season to season.

So the whole point of this article is actually not about the exact dates but really by giving you the exact time at the year to set up scouting assignments for each nation in order to spot the newgens coming through.

There is also another type of youth intake transfers. It’s not really a youth intake it’s the game itself completing lower tier teams that the game felt it was necessary to compliment them with random generated players and their age are mostly on their mid 20’s. This kind of intakes may happen in every country and they take place in the beginning of each country season (when fixtures are released).

NB! According to research done in the FM19 beta, the newgen dates are currently identical to FM18.

The list of youth intake dates for the European nations is sorted alphabetically and shows the date of newgens arriving in Football Manager 2019 from 2018 to 2031!

North and Central America has fixed dates for most of the countries except for USA and Mexico.

A Nation that may be worthy to scout within Oceania is New Zealand.

Thanks to kworey, who has done the research for this article and made it available for us to publish. For more work from Kworey check out his Youtube channel or follow his livestreams on Twitch. PS. He streams/do videos in Portuguese but feel free to interact with him in English.