This unauthentic Football Manager 2018 American lower league database let’s you experience a different kind of the United States football league system – A pyramid converted into a more playable version with promotions and relegations enabled within a 7 tier division system.

This FM 2018 American lower league database revamps MLS and NALS as they are official known as today and provides you with the chance of starting in the bottom tier of the American league system and work your way to the top. It’s perhaps a perfect fit for those of you who are looking to try out your skills in the Football Manager hexagon challenge.

We hereby give the word to the creator of the American lower leagues database for Football Manager 2018, who will give a more detailed explanation of this custom database and why he has moved away from the official United States football league system; MSL, NASL and USL divisions.

Although many like the nuances of the MLS system of Designated Players, roster limitations, salary cap, and lack of promotion and relegation, others have always envisioned a more “traditional” setup for purposes of Football Manager as well as real life. It is with these people in mind that I have created this database.  Born and raised in New York and having followed MLS from the beginning, this is my idea of an ideal future for the American soccer landscape.

This database is available on steam at

Then you can decide to either select all players from the continents of North America and South America in companionship with selecting all players based in the Caribbean region, which will provide you with a database size of around 70000 players and staff.

Another option is to select all players based in the continent of North America plus Central America. 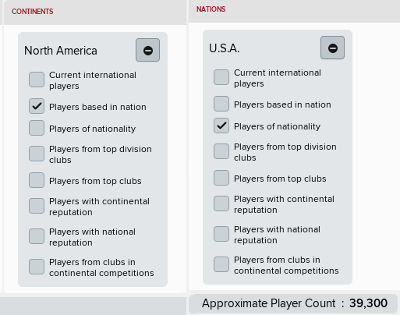 Division 1 takes the place of MLS to get around salary cap issues and designated player rule. This league includes all current MLS teams. Since LAFC is not slated to start until next season, I have included them in division 2. All teams have a U20 and reserve teams. There are separate competitions for the U20s and Reserve teams.

Division 2 is made up of NASL and USL teams, with the exception of MLS “B” teams.  I did not add these teams to the database, so teams such as Red Bulls 2, Timbers 2 and Orlando “B” will not appear.

The rest of the divisions were set up based on their Football Manager reputation rating, so there are teams that did not make it into the database.

I am open to suggestions for future updates and tweaks to the division setup.

I have eliminated all rules related to designated players for a simpler approach. Each team is allowed 6 foreign players per team. After some initial feedback, I have only allowed trialists to play in divisions 5-7. They are not allowed to play in The US Open Cup. Youth players can be as young as 15.

The US Open Cup is a single elimination tournament which includes all teams in all divisions. Winner gets a
spot in the CONCACAF Champions League, and clinches a spot in the Super Cup.

I have added a lower league cup for all teams division 2-7 which also gives a spot to the CONCACAF Champions League.

The Super Cup is played at the end of the season between the winner of Division 1 and the US Open Cup.

All teams in the available database are real teams, all of which have appropriate stadiums in their realistic locations.  If you have any feedback or suggestions on how to update this database, please let me know.  I will be working on a database for Peru next.