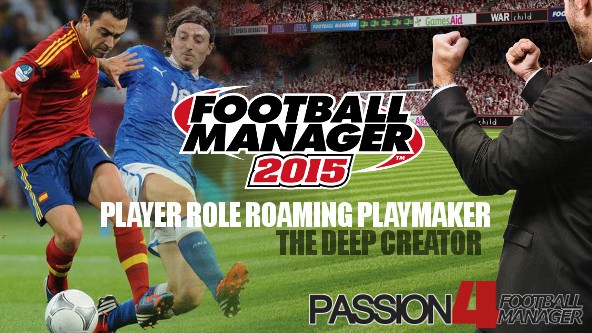 The Deep Creator: Lying in the Deep and Roaming to the Advanced Areas

Welcome to my first article on Passion4FM’s new website. I’m Ryan Tank, a passionate Indonesian Football Manager gamer with great interest of the tactical aspects of the game.

In his article, The Death of the Classic Number 10, Omar Saleem shows why the classic number 10 sadly comes to an end, by stating :

“The Increase in the speed of the game as well as a greater reliance on strength and power has contributed heavily to the downfall of such player.”

Omar also explains that the use of anchor men and powerful holding midfielders has been successfully denying the opportunity to play between the lines. For modern football, it also means the anchor men and the likes are whom to nullify the space to work for the classic number 10.

Omar then points out the importance of deep creator.

When we see Dortmund, Bayern, Barcelona, or Italy, we’ll find out that the teams I had mentioned, utilize the combination of vision and wider viewpoint from the players who sit deeper in the central midfield, to control the play. Ilkay Gundogan or Nuri Sahin, are the Dortmund deeper creators. Gundogan offers range of passes and relentless-run which often shows him drifts into the penalty area and creates much havoc. Nuri Sahin is bit different. Sahin is known as a great long range passer. He also adds his play with his hardworking character, which puts Sahin to fight for the ball. Sahin also praised by his “arrive late into the penalty area”, which often appeared on many occasions in the season before he joined Real Madrid, gave him several important goals and Bundesliga Player of the Year.

Marcel Schmelzer comes from left-wide area. As Marco Reus there and ready to receive pass, Schmelzer then passes the ball into the space where Reus has been waiting for

Nuri Sahin sees the space to move into. He quickly drifts into the penalty area and hits the Schmelzer’s pass with unpredictably one touch-one shoot.

From the two pictures, we can see how Nuri Sahin makes use the wide viewpoint he has, by moving and patrolling from the deeper area. One of the benefit by playing deeper as a deeper creator, is, you can make a deadly blind run and break the opponent focus and defensive system, as what Sahin shows in this occasion.

In Bayern, what Xabi Alonso showed in the match against Cologne has been the epitome of modern deep lying creator. Xabi made 206 touches (which breaks the Bundesliga single player most touches in a match) and 175 passes. This amazing display, being the crucial part of how Bayern boss the midfield and boss the play. The crucial role which was taken by a deep creator.

In 2010 el Classico, which showed the superiority of Blaugrana, Xavi Hernandez, the ideologue behind Barcelona’s aesthetic tiki taka display, opened the score and inspired Barcelona to puncture Mourinho’s side five times. It was the goal started by a simple passing combination from the middle. Messi then swept the ball out to Iniesta, while Xavi came from behind, penetrated into the box, as he found the Iniesta pass into the box, beautifully controlled it, and finished with simple volley past Iker Casillas.

Messi sweeps the ball out to Iniesta, while Xavi is ready to run forward and gets into penalty area

Iniesta passes into the box to Xavi, who roams from his deep position and gets into the penalty area


Lionel Messi drops very deep. He initiates the attack. Xavi Hernandez, the Bracelona deep creator, interchanges with him. Xavi makes a good forward move, picks up iniesta’s pass, and with a pretty tight control and a cold-blooded volley finish, he scores the open goal.

Football tactic changes form an era to another era. We have witnessed the “death” of classic wingers. We also see how the 4-4-2 basic shape has revolutionized itself into lone striker basic shape and even the strikerless one. Brazil won the World Cup with their double deep pivot in Gilberto Silva and Kleberson, who played huge role to boss the midfielder, with power, balance, and technique. Then, AC Milan and Andrea Pirlo raised the deep creator to the higher place, after winning the 2003 UCL trophy, with Pirlo played as the deep creator. Spain Euro 2008 and Barcelona treble winners the year after, show the world, why is deep creator is so crucial to help them won all the trophies, and, of course, how to make use of it for the team benefits.

Deep Creator drops very deep. His movement immediately creates triangle shape, which is crucial in terms of possession football. Deep creator always tries to get close as possible to the ball carrier to offer passing option

In this occasion, deep creator roams little bit forward and positions himself little bit higher compared to his teammate on Central Midfielder position

Again the deep creator roams from his position, pushes himself high up the pitch to control the play 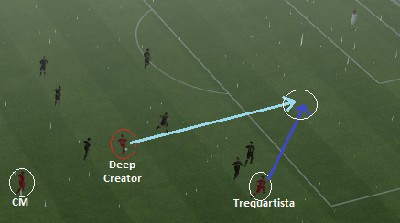 Deep Creator moves to the advanced area, he gets further forward and often finds a good position to hit a deadly pass to his teammates

In many quick counter attacks, a deep creator makes many great vertical movements and impacts to the opponent defensive line. As shown on the above picture, deep creator pushes up and picks up the RDW by releasing a killer ball

As you can see, it’s all quite close to what Football Manager 2015 new player role Roaming Playmaker manual says ;). Of course, it’s very not fair to judge this Roaming Playmaker role, without trying it out first. I know it. To justify my own opinion, I of course got to play the 2015 version.

On the other side, in my opinion, it might be more challenging, if Sport Interactive (SI) creates these new roles, as the “hidden ones”. I mean, the user can adjust/tweak (for the simple example) the combination of Role-Duty, Individual Instruction, Team Mentality, and Team Instruction, to generate them, instead of choosing them from the drop down option.

So, guys. Andrea Pirlo amazing performance in the match of Italy 1-1 Spain in Euro 2012, how Xavi Hernandez controlled the game when Barcelona trashed Madrid 5-0, and the energetic runs and range of passes offered by Ilkay Gundogan and Nuri Sahin, have been the symbolization of roaming playmakers. To re-create and succeed with these world-class players style of play in FM has been a privilege from an era to another era. A perpetual hunt which fun, passion, and pride take huge part in it. An achievement which seems to be simple but it’s actually been a special one for us, the virtual manager in Football Manager.

I’m waiting for you, Roaming Playmaker.