Hello, I’m Twitch streamer kworey and I present to you my first released Football Manager 2015 tactic. I made this tactic with two philosophies: attack and close down as much as you can. As you probably have heard the best defence is the attack and this tactic simple put those words into actions. If you wanna see huge scoreboards, a lot of attacking and make hell for other teams, i believe this is the tactic for you.

This tactic is Patch 15.3 compatible.

The formation is a classic 4-3-3 narrow. With such narrow formation we are able to close down much easier to interrupt other teams attacks and also to provide more passing options for a transition football.

At defence we have 2 central defenders in stopper duty, i found out after several tests for the way we play and approach defensive situations the stopper duty with more close down makes our team press even higher and win balls in advanced positions. You might be asking if in terms of long balls or pacey forwards we might be exploit. In a certain point its true but i tried with the full backs lack those weaknesses, with this meant our full backs set on attack duty when on defensive situations they will work as covers when opponents try to exploit balls behind the defence. On the attack they will be the standard full backs awaiting to get crosses or simply to recycle ball possession into the center of the pitch.

Midfield consists on 3 generic central midfielders with no specialist role. Why no playmakers or ball winning midfielders you might be asking? The team shape is set to be very fluid so in terms of building up more creative players will assume a more constructive role and in terms of closing down and attack/finishing situations these roles provided me the best results. The central midfielder support will hold more the position in the back but he has freedom to also go further forward to appear on finishing situations but he is also important for that possession recycling and win lost balls when the opponent team is trying to be released from our intense closing down and attacking massacre. The central midfielders attack will have more expressiveness on attack with freedom to run with the ball and appear often on finishing situations (i will explain this more detailed due to our forwards roles).

The forwards are the key to this tactic. On the sides we have 2 deep lying forwards on attacking duty, they will basically drop deep to link up offensive transitions, they will explore open spaces and try to get balls into the box, by crossing/passing or themselves fancy that chance of scoring. The central strikers is a complete forward on attacking duty. I have tested basically all the roles in here and the complete forward role is like the cherry in the top of the cake. He will try to be involved on every match situation and he will be your main goal scorer. He will also have the ability to open gapes in the defence so your central midfielders can appear on finishing positions. The deep lying forwards will also tend to cross/pass into these central midfielders since they will appear most of the times the best finishing positions.

All of this combined we manage to have a strong scoring team that can beat any opposition with more or less difficulty. The major struggle with my Football Manager 2015 attacking tactic is defensive situations due to the demands of the tactic in terms of closing down but after a couple of games when the team gets fluid with the tactic you will be delight with the amount of goals your team will be able to score or have chance to do so.

The team instructions basically reflect all i have been talking before with a short passing to provide transition football, close down as much as you can, and keep the formation as narrow as possible to be effective on the closing down. The tactic has the corner/throw-ins advantage, free kicks i think this is the most successful setup in terms of free-kick chances and goal scoring ratio.

Pre-season: Team-Cohesion: Very High. Match Prep: 50% Match Tactics until the end of pre-season. No rest before and after matches.
During-season: Balanced: High (if most of the team complains about the workload i decrease to average). Match Prep: 30% Def. Positioning (but if your team is way stronger than the opposition go Att. Movement, also if your tactic is not fluid go 50% Match Tactics). Rest after matches.

I do my player specific training to adapt them to my match tactics and the role they play, so if your player isnt natural on the position you want him to play do position training for the position and in terms of focus i do the following:

In terms of PPM’s i don’t give much importance to them and if i get suggested by staff for a specific PPM to train, i make my own analysis to see if that PPM will actually benefit my player on the why i want him to perform. PPM’s i usually learn are avoid weaker foot on GK and get further forward on every position except the central defenders. Play 1-2’s is not a bad PPM either. I tend to unlearn argue with referee if my players have it.

After several tests with this feature i ended with this setup:

I don’t close down strikers and attacking midfielders cause after several testings i found out defenders are more prone to fail interceptions when closing down them.

After several tests i found that being aggressive on team talks gives amazing results, even if players react bad.

On beginning on every match (even when the underdog) i go aggressive – i expect a win or revenge if that option is available (in case you lost the last match vs that team).
On half time if the team is losing, tied or winning but not performing, aggressive – I’m not happy. If we are winning and playing well calm – keep focus.
At the end defeat or draw i go aggressive – I’m not happy (notice if you draw against a really big team go with calm – unlucky/you did well). In case of a win calm – (depending on result give your positive approach). If you feel like you won and team didn’t performed go calm – i expect better performances or second half was unacceptable.

In-game team talks a new feature of this Football Manager i tend to go aggressive as well. When we score concentrate or if we are winning and you want the team to keep their performance up, encourage if you concede, get creative if the match has no highlights and very rarely push forward when match is going towards the end and you need a goal (i tend to do this if for example i score a goal that tied the match so team with the morale increase keeps pushing up to get the goal that gives us the lead, had plenty of success with this).

See results from using this tactic under the download section

A Football Manager 2015 attacking tactic which is based on a default 4-3-3 formation created by Kworey.

This tactic has brought me much success in all my saves and all the tests i made, and also increase by a lot the amount of goals my teams score.
I leave you with some results and achievements with my tactic (all the screenshots below are achieved with the clubs default teams on first season with no database changes. Ajax has no transfers, Boavista has only 2 free signings). 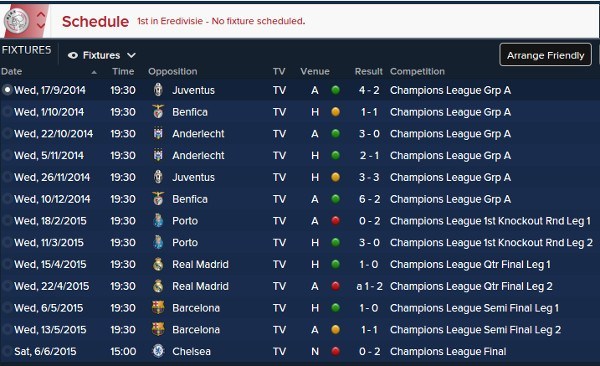 An Insight to Expected Goals Model (xG) in Football Manager 2021